Jump starter always relies on the battery as the source of energy. Therefore they should charge often depending on how you are using it. It’s recommended at least once every 6 months. Jump starter battier may lose charge whenever the car is left in the cold or hot weather. Therefore, you are advised to keep them in suitable temperatures that will not interfere with their charge.

Everstart jump starters have high safety precautions that prevent power surge and short circuits; thus, they are protected from high voltage power that can get them other damaged. It has a cover that protects it from any breakage being something that is used in an emergency; it can be miss handled quickly; that is why it is handled carefully and protected.

How to Use Everstart jump starter Pack

Below is a step by step on how to use Everstart jump starter: 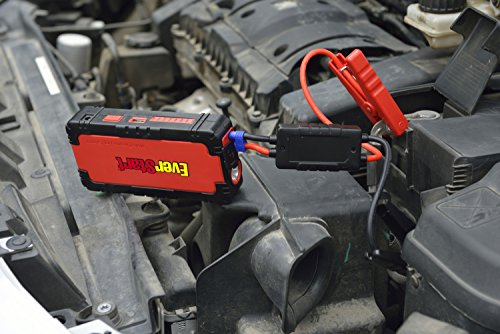 When it comes to choosing a jump starter, it should be one that is durable and has accompanying accessories that will not make you incur another cost by buying them. With Everstart jump starter, you will not take long it as it is very easy, and any person can use it. This is a necessary tool for anyone owning a car as an engine can fail to start anywhere, and you will need a jump start.

Just like other electrical appliances, storage safety precautions are essential. Batteries are greatly affected by extreme temperatures. They should be stored between 10-20 degrees Celsius. If it is stored in cold temperatures, its power to jump-start goes down, too, unlike when kept in a warm place.

The Everstart jump starter has grown to be the most popular lately. This is because of its high performance it gives to the car owners. Thus it’s reliable, and it has a relatively low price when compared to other competitors. It is also designed in such a way it is portable, which makes it ideal for various functions. 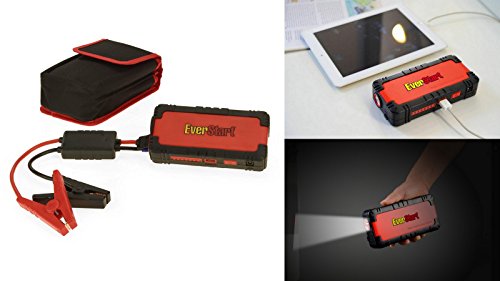 Everstart Jump Starter has a power indicator that shows the battery power level. Most of the manufacturers recommend that new jump starter to be charged at least for six hours. When it’s full, it shows a green color. For more details about charging, Go to how to charge a jump starter.

Due to improved technology, the Everstart Jump Starter also has modern technology that makes it perform better than others. Other than jump-starting and recharging, there are also various models that come with air compressors that you can use to pump your tires.

The jump starter can be used as floodlight as it has led light. It has 12000 mAh batteries, thus gives optimum power to crank the starter and can last for a longer time before it is recharged. The Everstart jump-starter is designed in such a way it not very big, this makes it portable, and one can move with it around with its bag.

The Everstart jump starter comes with clamps, chargers, and adaptors for dc devices. As stated earlier, it is straightforward to use, even for first-timers.